On Sunday afternoon, I was walking around the edge of the yard, really looking for caterpillars of the Swallowtail butterfly. We’ve seen their caterpillars before and in the morning I saw a few adult swallowtails, so I was just out looking for something cool.

I first saw it in flight and I thought, “That’s a funny looking dragonfly”, but on further inspection, I really didn’t think it was a dragonfly at all! So, I snapped a couple of pictures.

Later, I used Google Lens to try to identify it, but all of the entries on Google Lens were European parasitic wasps.

I sent the photos to my father-in-law who collected bugs and asked him what he thought.

He sent me this photo from a guide book.

The images here seem to be male. The extra long “thing” on the one that I saw appears to be an ovipositor, used for depositing the eggs into a larvae. I was then curious about the size of the one we saw, so we took a picture of the same leaf with the tape measure and see that most likely the insect we saw was between 1″ and 1.5″. So, in the book, this horntail in the middle is the largest and measures 25-35mm which is .98″ to 1.37″. The Ichneumon is considerably smaller, but the wings on the insect I saw were more clear like that in flight.

Here’s a picture of the leaf with the tape measure for reference.

I also posted this on a Michigan Nature Identification group on Facebook. A member there thought that it was more likely a member of the ichneumon group and directed me to look at other examples on BugGuide.net. So, I checked that out and found this example, Coleocentrus Pettiti

I found another example that said that the the body on the coleocentrus was an average of 17mm and another 13mm for the ovipositor, so taken together, that would be between 1 – 1.5″.

This looks like a likely choice to me, but I’m curious what others might think! I also looked up on BugGuide.net the Horntails (family Siricidae). Here’s a link, but I don’t see any with an abdomen this slender.

Here’s a closeup of the one that I spotted for further identification! 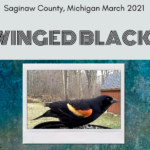