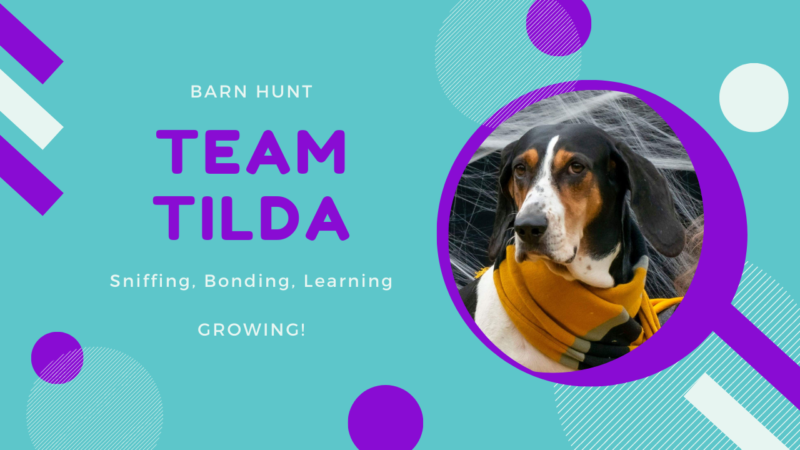 It was our 2nd week back to classes with Coach Karli after more than a year off. This time, class started earlier in the day, 3:30. That’s an ideal time for Tilda. She’s happy and active and focused in the afternoon. It’s hard to factor the dog’s ideal time of day into trialing, but for training, it’s nice to go at this time of day. There were also fewer dogs and her confidence was definitely higher. We ran 4 times, here’s how we did!

We got both our rats and we were under time. Final time was 1:31 including tunnel and climb. She really remembered why we were here! The 2 rats were a short distance from each other, like across an aisle. She first stopped in the middle and stood still and was looking back and forth. I knew she had 2 rats and was really curious what she would do. After a couple seconds, she finally dug at one that was down on the ground with her paw, I called rat and then she went after the other that was up on a bale. It was cool to see her have to decide which to go for! We never really had that before.

We were only 10 seconds over time on this run. She still did her tunnel and climb and found 2 rats in 2:40. She smelled a rat near Karli right away while we were still in the start box but she was a little nervous about going to it because of the space and being unsure if she should go after something so close to Karli. This is great practice for her! We struggle with those spatial things from time to time and especially when a wrangler is there, too. It was good to see her get her confidence and go after it! wesome. Then, I held my end of the bargain by knowing there was one up and helping her check up high on the different course elements. Glad about our teamwork on this one!

This one was really interesting. We didn’t make our time, but we did some good work! She found one rat down right away between 2 bales. She hesitated at first because she pushed it forward. I helped her come from other direction and then called rat. So, I’m working on my training and I knew the next one was up. She kept going in the tunnel slow and smelling along the side near the bend. I knew rat was up on that structure and because of the chilly weather the smell was sinking. I finally got her to come out of the tunnel and climb and find the rat! That was really good seeing her hunt for that one and having to really work that scent cone in a different way. Also, it’s always good when I can bring something to this team. Hahahahaha

Karli went into the rat room in between dogs and Tilda got a little rat crazy, I think. She barked on the leash with me and I thought at first it was at another dog, but then saw that it was Karli carrying a rat in a tube. She was very wild trying to tug towards the ring while we were in our blind area and showing a lot more confidence generally. Tail was up, she knew what she was here for and she was here for it! When we got our turn, she was very excited and took off right away. She found one down and then got super interested in something in the straw where there had been a previous lie. She found something there to crunch on. Then, there was another person who was leaving and so a loud vehicle that caused her to run around. I knew the next rat was up and I helped her to focus on going up, I had to lure her by saying “cookie”. But, when she got up, she again pawed at the tube and was really excited. Then, as we were leaving, Karli was hiding the rat for the next competitor and Tilda found that one, too. Even with the distractions and running around she finished in 2 minutes 28 seconds.

She had so much fun today and so did I. It’s really nice to be back out in the world and having fun and building teamwork with my dog. Here’s a picture of the happy hound when it was time to go home. She was very satisfied with herself! 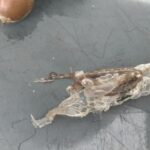 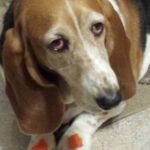