Tilda and I were able to return to Barn Hunt classes tonight! We’ve been away for over a year. It was so fun. I probably talked all the dog people’s ears off. I’m not sure about my dog, but I’m definitely under-socialized.

On the actual training side of things, I’m proud of us! Our teamwork was still there. Tilda was distracted at first but ended strong. Karli let her see the rat again and she played with the rat tube in the straw a bit. I had to still steer her in the right direction with Karli’s help but she did get into it.

Her second time in, she did better. I still steered her towards the first rat but she gave me a head turn and a lot of ear action. It was fun seeing her hunt by sound. She actually circled the tube focused on it, Karli thinks the rat was moving from one end to the other and that Tilda detected that. The 2nd rat that time was in a tough spot spatially between the tunnel and the open garage door area. She really hunted along the gate across the door and once again gave me those ears. She did paw the tube and give one good bark.

She behaved well on the leash in public which was great! We haven’t been out around a lot of dogs and she has more self confidence now at home so I wasn’t sure what to expect. She was still a bit nervous. Fire pump tail most of the time. I love seeing other dogs and people, too! There were a lot of herding dogs tonight. A corgi, an Aussie, a pyrenees shepherd (my first time seeing one of those!) A laphund, a couple huskies.

We are signed up for weekly for the next month so stay tuned for updates! 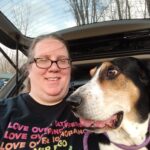 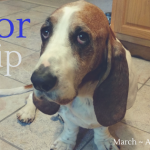